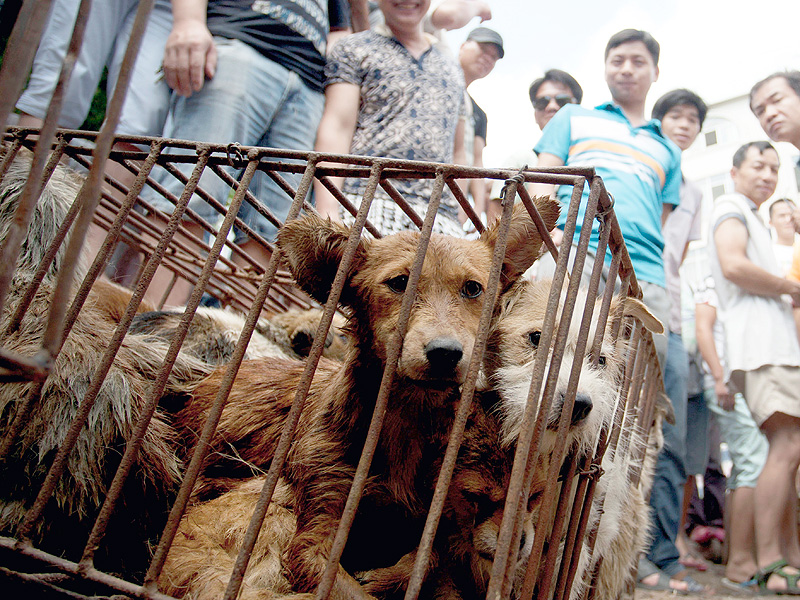 A festival in China where up to 10,000 dogs will be slaughtered and cooked is drawing outrage from celebs - and millions of people the world over.

Actor and creator of The Office Ricky Gervais is among the most outspoken, calling it a "Dog Torture Festival" on Twitter.


It's misleading to call Yulin a Dog Meat Festival. It should be called a Dog Torture Festival. Because that's what it is. #StopYuLin2015

An online campaign calling for the festival to be banned has gained more than 3.9 million signatures. People have also been speaking out against the festival on Twitter using #StopYuLin2015.

Other celebrities have also expressed their outrage.

Brazilian fashion model, Gisele Bündchen on Instagram, said: "It breaks my heart to see how much evil is out there, how can anyone torture and kill this loving and innocent creatures? Please sign this petition to stop this #YuLin2015. #StopYuLin2015 #stopanimaltorture #moreloveplease

MTV VJ Ruby Rose finds it "unbearable" and asked Twitter followers to sign the petition to stop the event.

https://t.co/tgKfNNnCY1 please sign this and retweet. This has to end. It is unbearable.

The festival, which takes place in Yulin, China, is accused of stealing pets to use for crispy dog, dog hot pot, and other variations, according to a story on CNN. Residents and dog meat vendors say the animals are killed in a humane way, but activists say the animals are severely maltreated. Gervais, a long time animal lover and activist, is a supporter of The Humane Society of the United States/Humane Society International's Be Cruelty-Free campaign and in 2013 was named PETA's Person of the Year for his witty and relevant attention to animal rights. He remains outspoken in his efforts.

In fact, just a few days ago the Humane Society International saved a dog from a Yulin slaughterhouse and named it Ricky in his honor.


SAVED! this sweet dog in a Yulin slaughterhouse, named him Ricky to honor our friend @rickygervais #StopYulin2015 pic.twitter.com/kXhABgHw6x